I ain’t gonna lie — I had so much FUN getting to help put together a baby shower for one of my friends!
You see given that I don’t have any sisters

and my one sister-in-law has many sisters) I was feeling like my chances of getting to help put together a baby shower was pretty slim- {you know how it goes- mom and grandma and sisters and sister-in-laws all have first dibs- I mean who doesn’t love to throw a party?!

}
But I got lucky- due to circumstances us friends got to throw her shower– okay okay I’ll come clean here really Kaytee who is amazing at putting parties together was gonna throw her shower- but I jumped all over that bandwagon and squirmed myself in and jumped up and down and said “pick me, pick me, Let me help! Let me help!” and so Kaytee (who I’m sure was frightened of my enthusiasm for this) let me join in on the fun.
We split up tasks and I was in charge of the invitations and decorating for the party, while Kaytee was gonna handle games and food {she’s amazing at food!}
The invites- 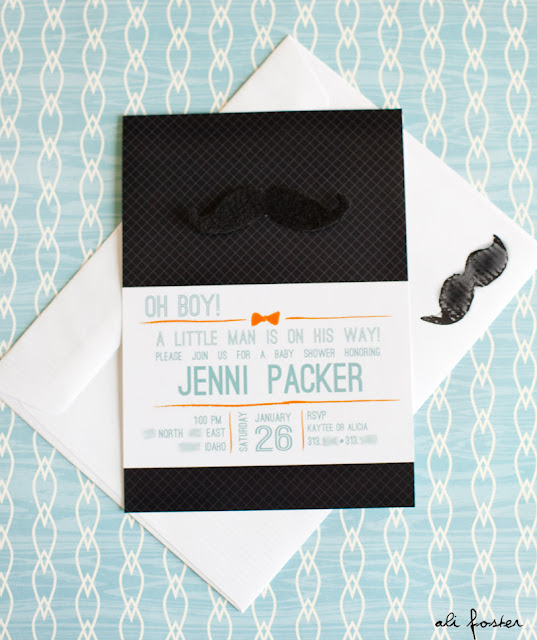 I was in a hurry- I kinda got late on board on this so I just printed them off at Sams and once again I have to say I hate how they slaughter the colors- the original of this was a pretty light grey- they printed it practically black.  Ya. just ya.  anyhow for them I cut out some little mustaches from felt and hot glued them on and Dave carved out of an eraser a mustache stamp for me {sounds long and time consuming but it seriously was easy and fast} 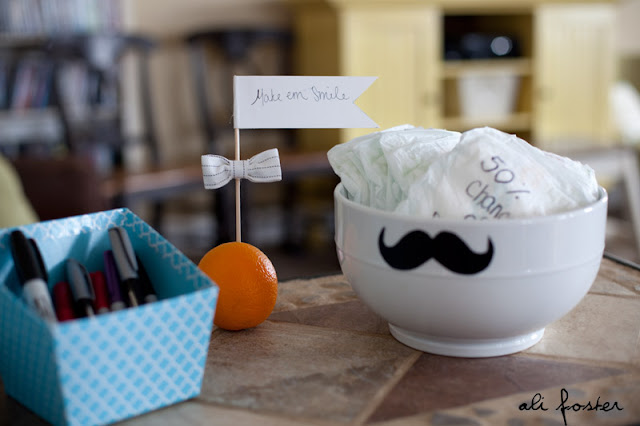 Tried to have a fun ice breaker with guests writing funny sayings for mom and dad on babies diaper. 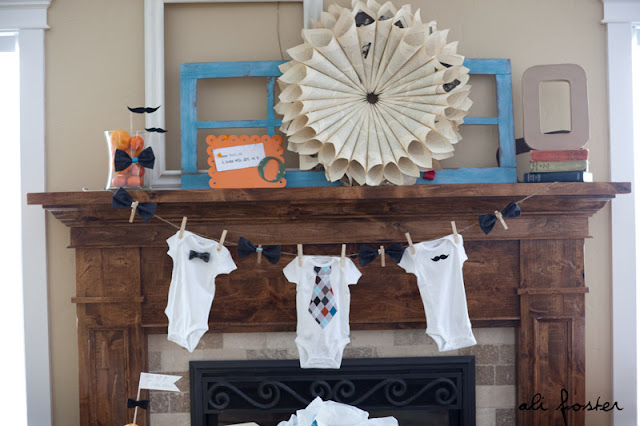 I had bought a pack of onesizes to give as part of my gift and use as decor- and than just made some iron on of the mustache and tie and than made a snap button bowtie for the other one– I loved how cute they were– And I have to admit getting to do all the fun boy stuff was fun since I’m gonna be having a girl and haven’t had a baby boy for a long time. 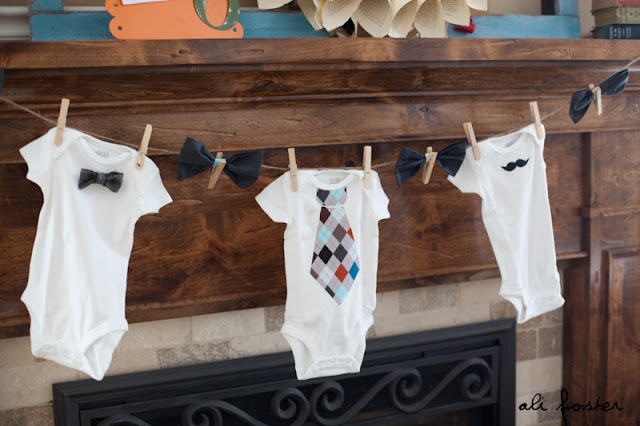 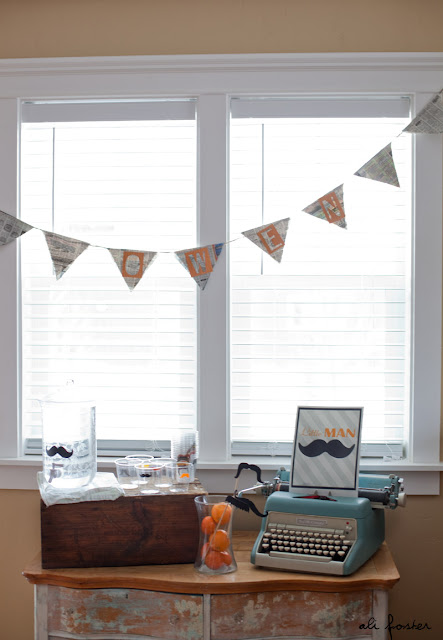 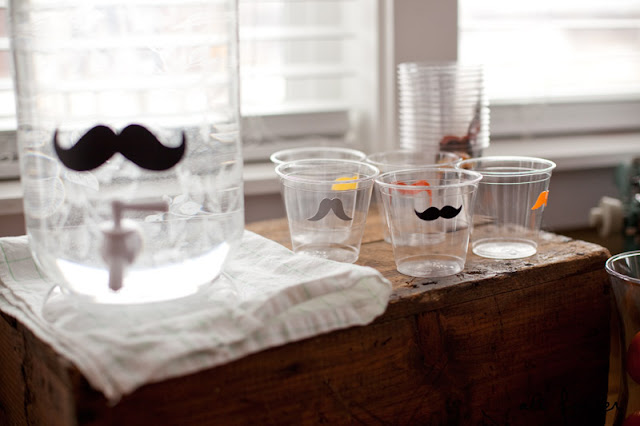 Little mustaches on the cups- Kaytee had found these and they were so cute! 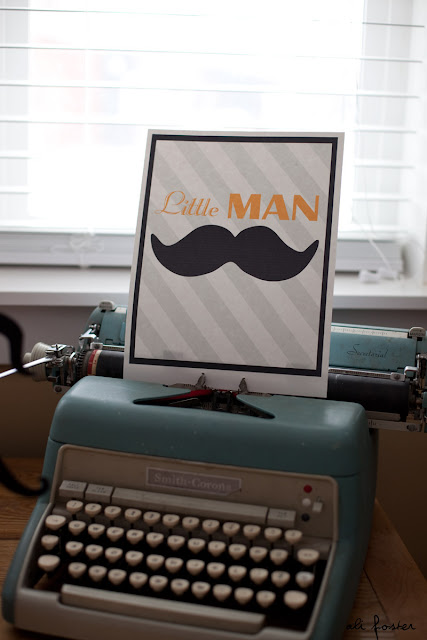 Designed a quick art print to sit on my typewriter 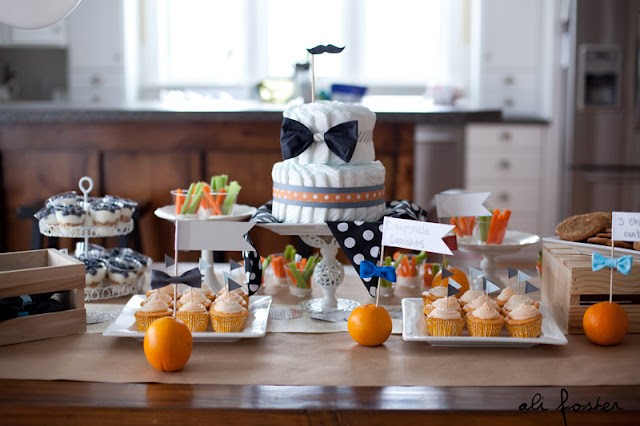 Kaytee of course made the yummiest snacks/food for it– the cupcakes we’re orange creamsicle- and so heavenly! Blueberry parfaits {yum!} and so soft and chewy 3 chip cookies! Makes my mouth water typing this. 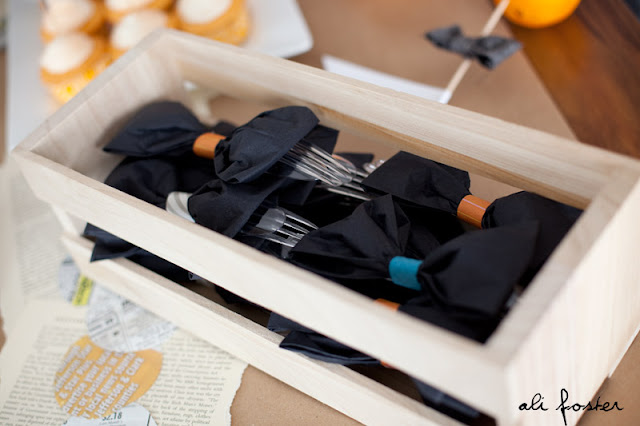 I made some fun little bowties out of napkins for it 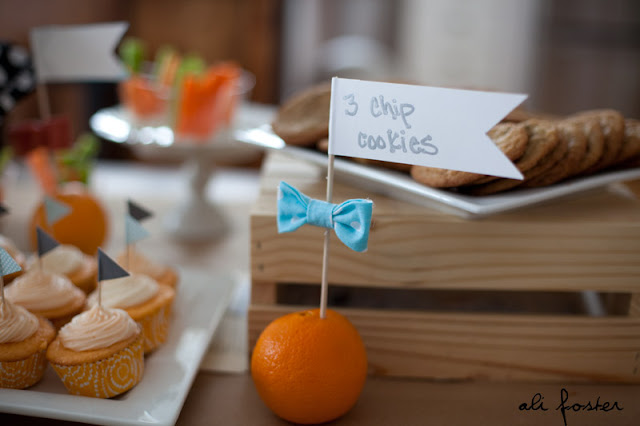 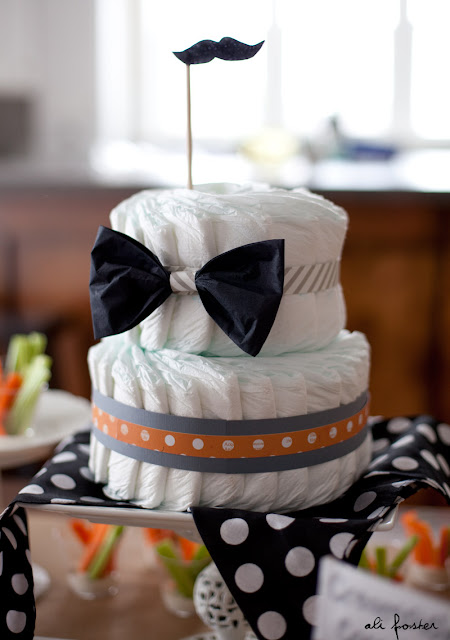 And a simple diaper cake for momma to take home– cuz we all know how many diapers those little one’s go through!
It was so fun to get to be involved and get to do fun little boy stuff for a change! I felt it turned out good , Jen got cute gifts and I got to help with a shower- “Squeal!” Fun day!
*** Here’s a big disclaimer– I am gonna get a little opinionated here***
So I try not to get my itty bitty feelings hurt but sometimes I do- and this has happened more than once to me so I want to get it off my chest.  So to understand you have to understand that I live in a small town with pretty practical people that are down to earth and work hard and are pretty dang thrifty, and I love it here! But what I don’t love and what ruffles my feathers is when “people judge” and say silly things like- “They spent a fortune I’m sure”- with the added tone of what a waste clipped on, “Or I’m sure they could have done without that.” clearly the thoughts of wasted money on their minds.
Drives me nuts! Really it does!
I mean really anyone who’s been on pinterest or blogs knows how extravagant of parties you could throw- and ours would look like a shabby piece of cloth held up to some of them- but why do they feel it is such a waste to make things pretty and let alone why do they feel the need to say negative things?
Hurts feelings ya know.

I guess really why it really hurts my feelings the most is I work very hard to be thrifty and I get creative to save money- I understand their mindsets, I have goals and priorities and really treasure being a stay at home mom, so I work to keep costs low and to not put to much added pressure on my husband with supporting our family, but I also know that you can be cheap and still make things pretty.
So to prove this to those- here is my cost breakdown of Jenni’s babyshower–
Invites- $8
I designed myself on my computer was .35 a card w/free envelope I ordered 20   $7.60 +.25 for the one sheet of black felt
Bow tie Flags- Free
I used scrap fabric that I had and hot glue I also had the small dowels that I just broke in half- but I know the dowels at the porters are $1 or so for about 60 of them, and who doesn’t have scrap fabric? For the flag I cut up one piece of Cardstock {I buy my white cardstock at walmart and get a ream for about $5}
*Bow tie napkins-$3 {but you would have to buy this no matter what kind of party you threw} so I guess it doesn’t count.
I bought a set of 25 black napkins at walmart $1 and a box of clear silverware $2 for the wraps
Scrapbook Paper-$1
I bought 5 scrapbook papers that were on clearance at Porters for 5 for $1– I used these all around, for the bowties, on the cake, on the onesie garland.
Bag of oranges- $3
Found them for .38 a lb on sale
Bunting- Free
newspaper- free, one piece of orange paper- stole from my kids stash- and twine-had- I have a big roll I bought from Walmart that I use for everything- I think it was $4 seriously had it for years now
Print- Pretty much Free
I made on my computer and just printed at home on a piece of my white card stock  I used ink from my printer which who knows how to calculate that and I’m not even gonna try cuz I don’t care.
Mustaches on sticks- Free
I had from a previous photoshoot but could have made more I mean we already have the sticks and black felt at this point.
Balloons- $1
I bought a bag of balloons that I hung from the ceiling and put mustaches on that I didn’t take a picture of– bag of balloons $1 and the mustaches I traced and cut out about 10 mustaches from my roll of vinyl that I have {you can buy a roll at walmart that has lasted me forever- I don’t know the exact price but I know under $10} I used probably 3″ of the vinyl, and I put them all around- on the bowl, on the drink stand ect.
The other things I bought just as much for decorating as for a gift that I could give her.
Letter O- $2.50
I got at porters for $2.50 using a 50% off coupon, was going to finish it for her but ran out of time- {the other thing on the mantle that was orange was something of Kaytee’s for Jenni}
The onesie’s -$5
I bought a three pack for $5 and used scrap fabric and scrap fusible iron stuff I had to make them
Diaper Cake- $6
I bought a $1 bandanna and a pack of newborn diapers which we also used to write on $5
Misc.- Free
On the table I rolled out some of my craft paper that I have– ya know the stuff you buy in the mailing section at Walmart that’s cheap– Ya I have one of those and after we were done I rolled it back up and will probably use it on some other project. I also used some sheets out of my old book that I bought for my book wreath that I made a while back {the book was $3 at D.I} and than I cut some circles out of the newspaper that I got to tie it in with the banner.
Everything else I used was stuff that was around my house- crates that I had and Kaytee had- my thrifted blue typewriter that I found that I use to decorate with, cake stands that I made with thrifted plates and candlestands, square plates I had found at D.I for $1 a plate forever ago.
{And most stuff that I used any crafter would have- they’re most of the basics and stuff you use over and over}

I know I know– and for the most part I don’t but occasionally I want to speak my mind and say  “Hello- you can make things pretty and not spend outrageous amounts of money it just takes a bit of time and creativity”  and things get made pretty – and pretty things make me happy!

Leave a reply to The Special K's(0: Cancel reply