So we had these little cuties running around our place since Zeeta had them in December.
They weren’t planned {ya know the after weeks of keeping Zeeta safe you go to pay the babysitter after letting her out to go potty and you find the deed is done- ugh- ya so we had puppies:)}
Boxador puppies {Boxer/Labrador} 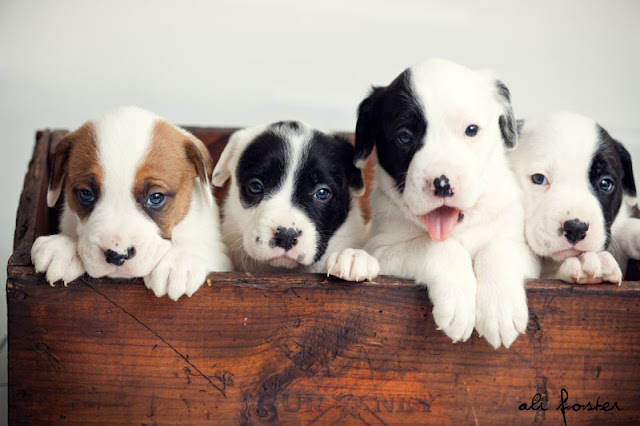 They were super cute and each of them were pretty unique and different from the others.
One of the bad things that happened though was during this time that Zeeta was pregnant and than with all the puppies I kept having massive outbreaks of itchy itchy hives. I couldn’t figure it out- I did have smaller like spider bite things earlier that happened quite often that I could never figure out what exactly was causing them but than I started breaking out with hives all over– on my back some days and those would go away just long enough for some to break out on my belly and so on and so on. Well we finally pieced it together- I’m allergic to the dogs, and with being pregnant my skin is now super super sensitive to it-{not to mention my immune system- hello every sickness!} Once they were kicked out of the house to live in the garage- I started not having any hives.
So while I loved them and they we’re so cute and the kids just couldn’t  get enough- I was happy to see them go. Zeeta is also going to a home this weekend with lots of kids and a good family so we’re thankful for that but I know I will miss her- she has the best temperament of any dog I’ve known.
Anyhow back to the super cute puppies. 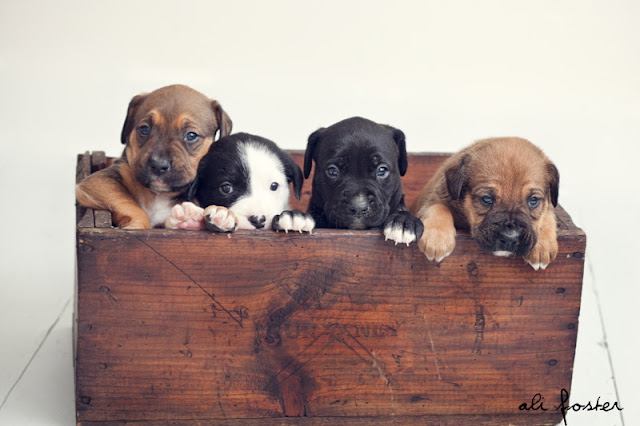 We named each of them to be able to tell them apart– though I don’t think it was to necessary since almost  all of them looked different from the others. 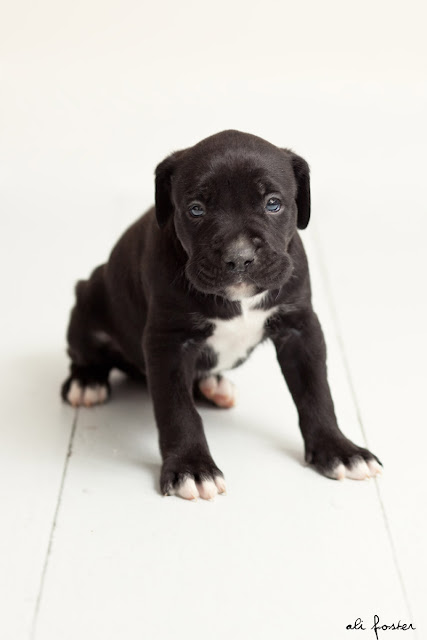 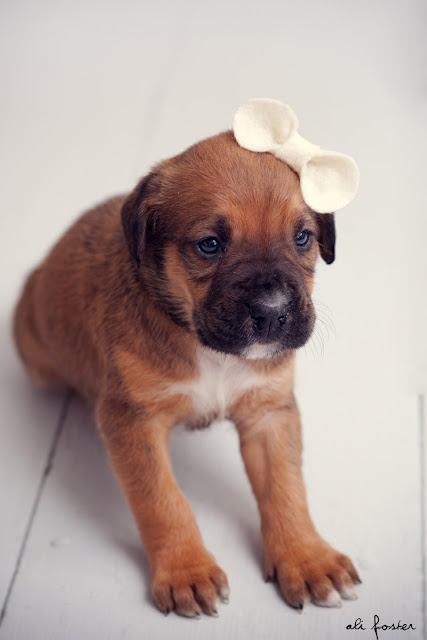 We called her Cocoa {she was our little runt} 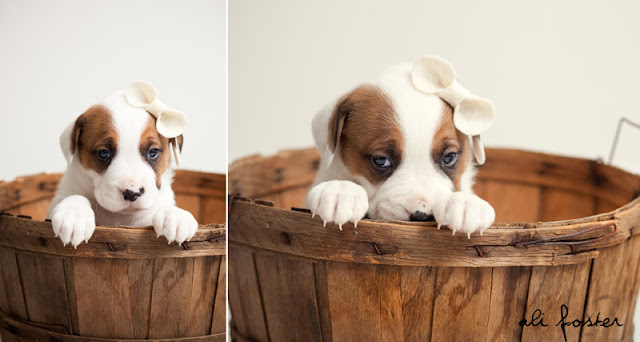 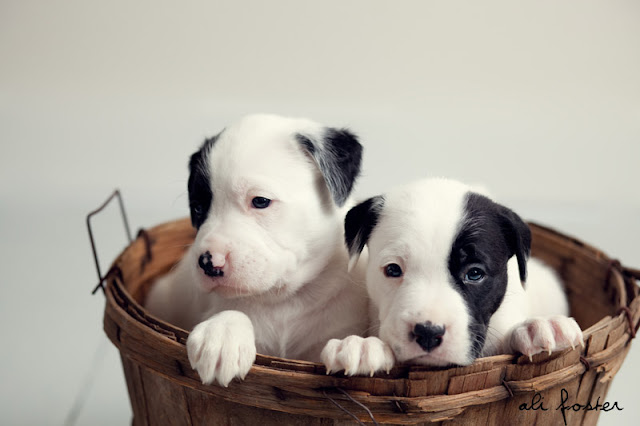 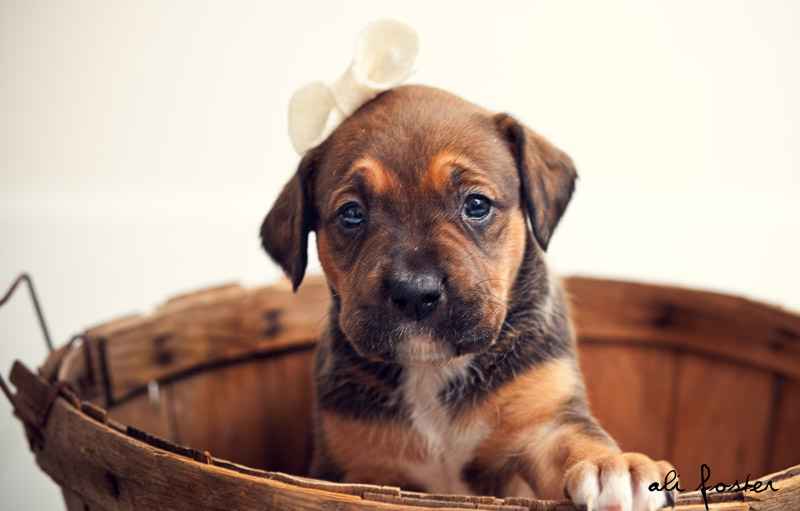 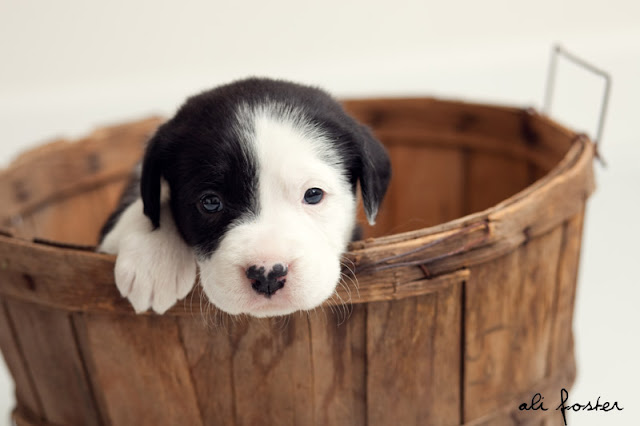 Little Po- {she resembled a panda to us- and had the cutest heart shaped nose!} 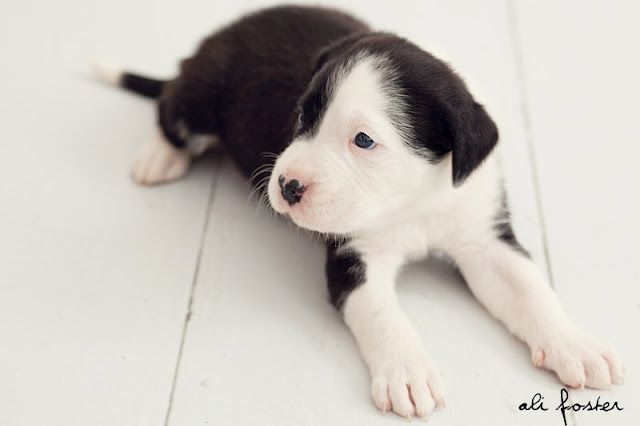 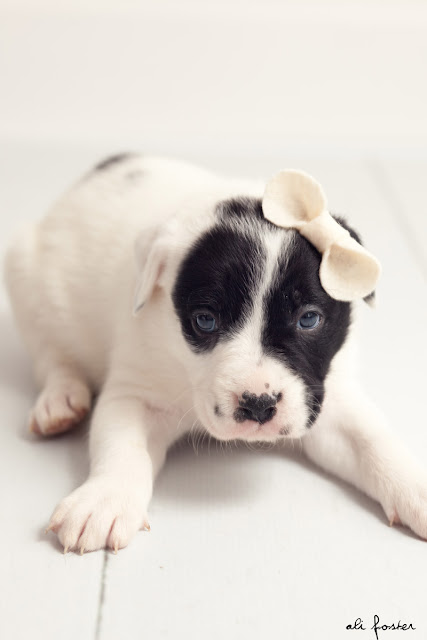 I have to admit I am pretty horrible at Self Portraits and well of me actually being in the photo, any photo.
It’s just so much work and I’ve yet to master an easy way to do it– but we’re working on it- expect to see a few Self portraits in my 52 project.
Another thing I’ve been horrible at is actually getting some pictures of me pregnant– you see I’m on number 4 here and well I have one horrible snapshot of me pregnant with my first and I think I took one in the mirror with number 3 but that’s all I have — so preggo self portrait it was. 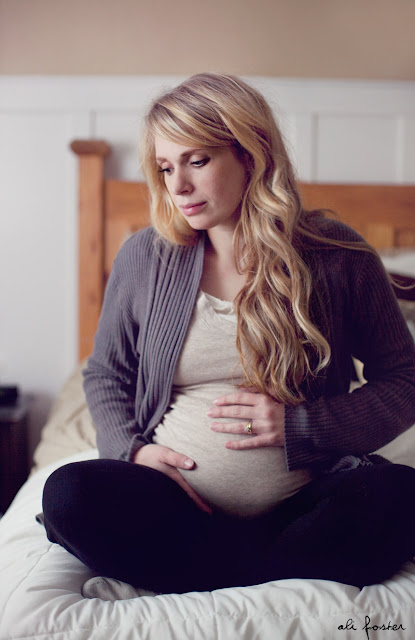 This week for my project 52 I focused on learning more about off Camera Flash
For Christmas my lovely hubby had bought me a light stand and umbrella so I could finally really get my flash off my camera– It’s been a bit overwhelming honestly- I haven’t always known if I’ve liked ocf style pictures but the more I learn and the more options it opens up for me in these bleak winters here – I am beginning to love it, now I just have to get good at it and understand it- which I have along ways to go

Bring in my lovely models my hubby and nephew {actually the only ones I could get to sit still and let me practice with them- take picture figure out the settings try again, picture, picture picture :)} 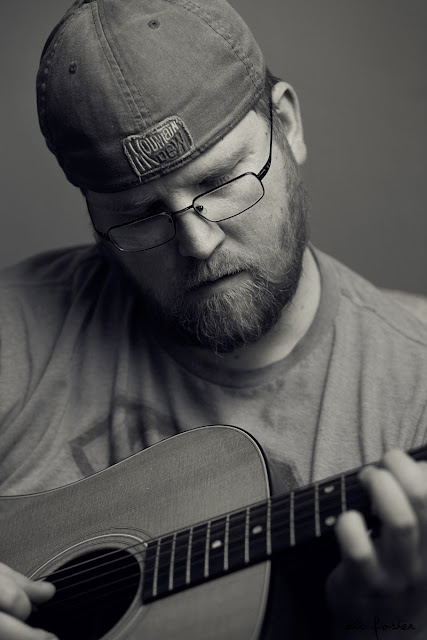 Soft umbrella lighting– nothing really fancy here I just set it up at a 45 degree angle and he was actually sitting just in our study mid day- dim lighting- I had made him move his chair away from the wall so I could get a bit more blur and control over the darkness of the wall.
85mm  f3.2  iso500 SS1/100 {flash 580exii 1/4 power} 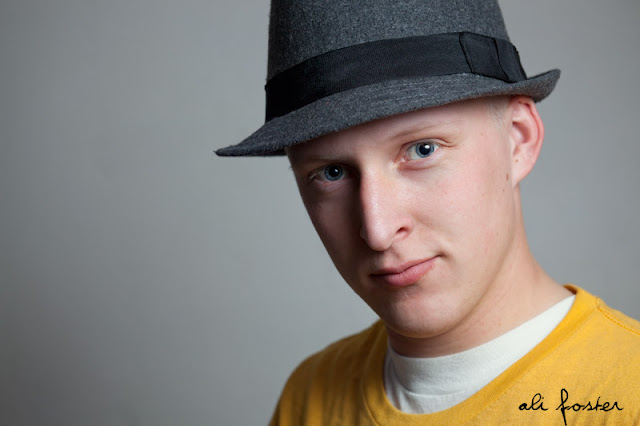 Shoot through umbrella at a 45 angle- I just had a normal painted white wall in our house and had him about 6 feet from it for the background. It was getting pretty dark the sun had already set and I had to have the room lights flicked on and off so I could get my focus to set.
85mm  f6.3  iso200 SS1/125 {flash 580exii don’t remember the power setting}
“The boys” wouldn’t agree to be my slaves/models unless I let them have some props that they wanted in the photos

So Guns and dramatic lighting it was. 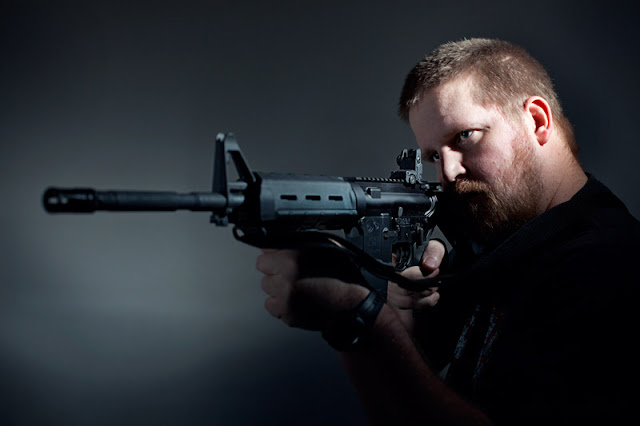 These one’s I shot with just my flash bare{no umbrella} so I could get the hard lighting and exposed almost for black on the background- we were still just using a painted white wall in our house as the background.
85mm  f4.5  iso250 SS1/160 {flash 580exii 1/8 power} 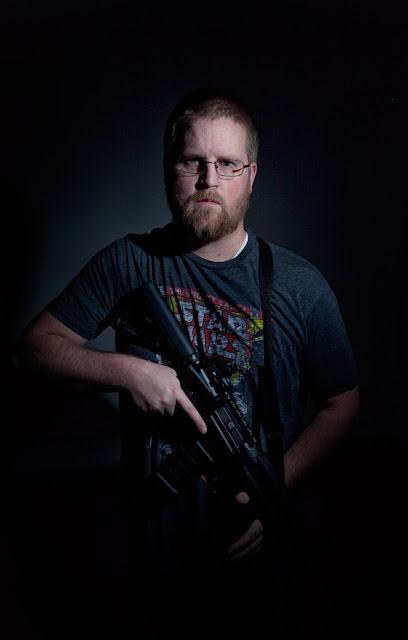 This one I did have to darken the right side back wall in photoshop because I had alot of spill lightage hit from the flash- but dave liked this one -someone made the comment about him nerding up the shot with his star wars shirt which just made me laugh– I didn’t style the shots- and this is so just my hubby Dave- Nerd shirt, beard he wants to grow out like one on duck dynasty{ya he might get shaved one night by a wife sick of it

} and a huge amount of varied interests in life{computers, hunting, fishing, building, cars} I very much do love the man and love that after 9yrs of marriage he still treats me like a princess and makes my legs turn to jello when he’s romantic

oh ya anyways back to about the picture and flash 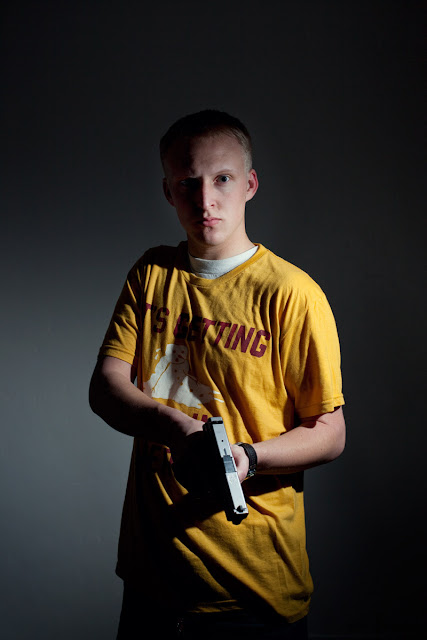 So much to learn still but it was a pretty fun evening and getting to shoot when it’s dark and no natural light to be seen was pretty cool.
85mm  f5.6  iso250 SS1/160 {flash 580exii 1/32 power I think I wasn’t positive on this one}
Pretty much I’m trying to teach myself {what’s new there right

} and the Strobist has been my biggest help in trying to learn about OCF-  I have to read stuff about ten million times before I feel like I am understanding the concept and than I get out my camera and it’s read it again- I’ve realized I am a big visual learner and need diagrams and pictures to explain every concept but we are getting there and I’m excited to find some more willing models and practice some more- possibly some nice evening sky shots when it’s not -20 outside still {BURRRR!!}
Hopefully your staying warm wherever you are at!
END_OF_DOCUMENT_TOKEN_TO_BE_REPLACED
posted by alif, 14th January 2013 , Categories: photography

{I’m not a procrastinator or anything.}
While it would be fun to do it with a group{mainly cuz you get some feedback and praise to keep you going} I just don’t like the pressure of it- I don’t like trying to fit the themes and one of the main reason’s I’m doing a project 52 is to improve my photography and editing skills and shoot the creative things I’ve wanted to shoot, that I never seem to make the time to shoot.
So mine is going to be fairly {alright let’s be honest here-} completely Random 52.
Week one- my little Snow Angel 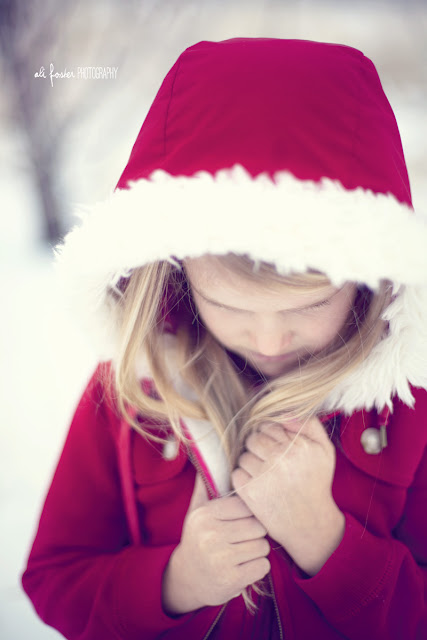 Canon 5D Mark11,  50mm,   f1.4   SS 1/200  iso 100
I liked this shot because while mainly I was working on trying to nail focus at wide open {which I still need to work on a ton!} I’m okay with it being out of focus and the mood it portrays- It was bitter cold! and this was Bryn just being Bryn holding her coat close and looking down in thoughtful focus– which anyone who knows her knows this is her- she is quiet and thoughtful and is in her own beautiful world in those quiet moments. 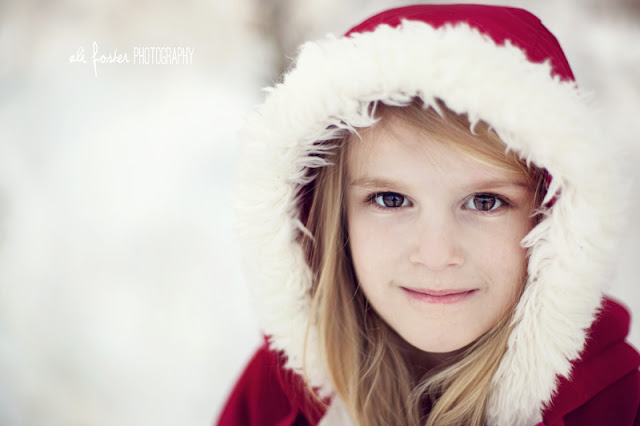 Canon 5D Mark11,  50mm,   f1.4   SS 1/200  iso 100
Nothing changed between my settings because mainly the only difference was she looked up at me and I was able to get my focus.
Bryn with her Beautiful Brown eyes- I’m still working on making sure I try to always get some catchlights in them- They sometimes are a challenge- and in this picture I needed to have her look up even more so to get beyond her hood and capture some more light from the cloudy sky above. {stuff to work on}
I still feel even after all this time I have really yet to capture just how beautiful the color of her eyes are. {The closest Brown eyed relation of hers was my great grandmother- so the brown eyes were a pretty unique thing for her to get in our fam- and I love them}
Have your own Project 52 going on?- Seriously leave me a link in the comments I’d love to follow along and leave some praise and encouragement for you along your journey too.
END_OF_DOCUMENT_TOKEN_TO_BE_REPLACED
posted by alif, 9th January 2013 , Categories: photography

So one of my goals on my 30 before 30 list is to learn about Flash Photography……. I’ve been gradually doing it and while there is still much much much to learn I had a ton of fun getting together with some other local photographers and getting to participate in a work{together}shop. 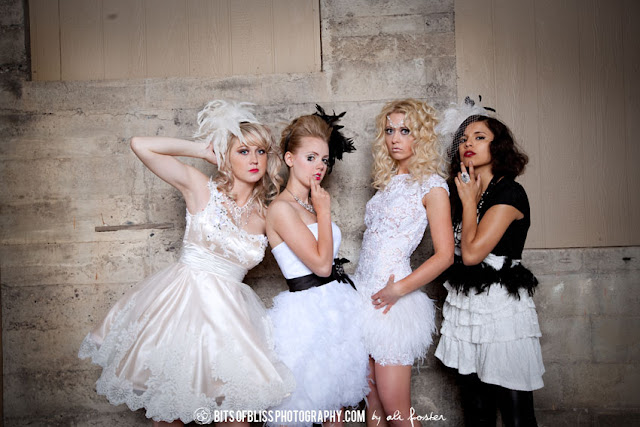 Emily and Nate Photography put it together {They are great!} and had all of their amazing flash and lighting gear there– It was awesome! There were only two of us Canon girls in a sea of Nikon’s so that made it a little tricky {figuring out the different settings} but it was so fun and I feel like I learned a lot! 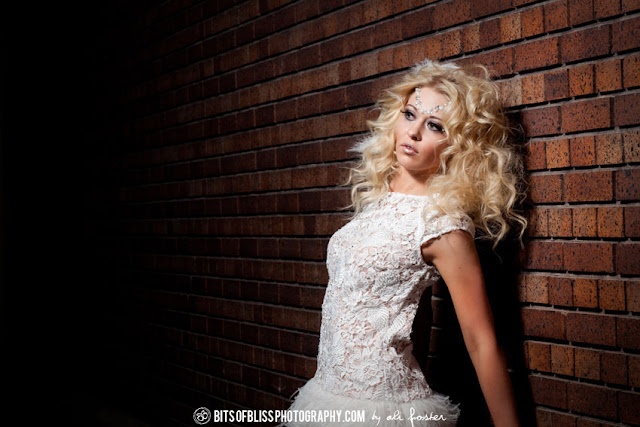 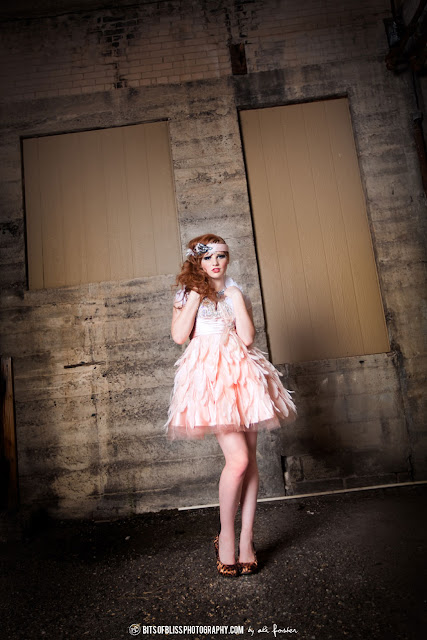 So while I don’t feel like I’m totally done with my goal– { I gotta get myself some more gear and do my own shoots} I’m still crossing it off the list! {cuz I LOVE crossing things off lists!} 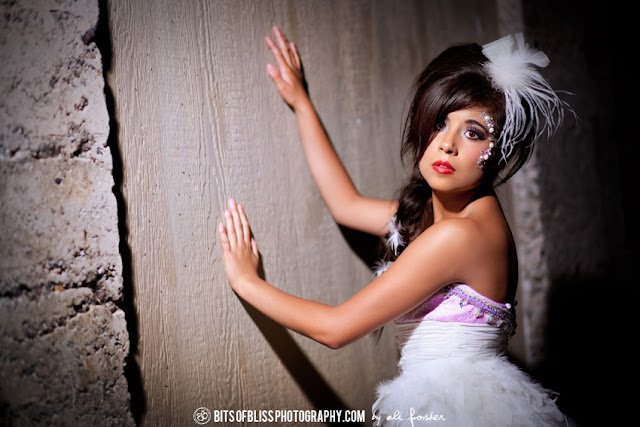 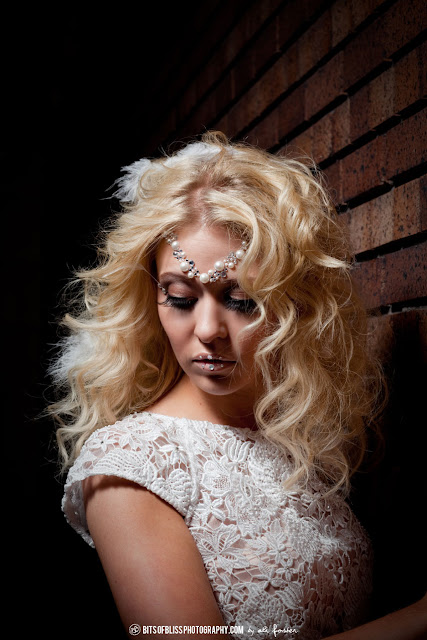 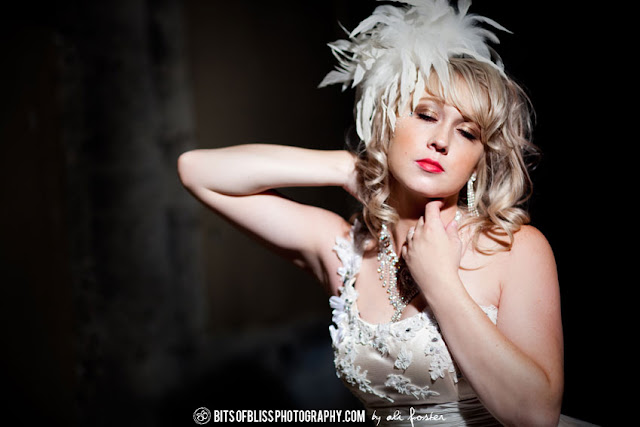