Prepared & Now Excited!
29
April
2010
So I’ve been slightly crazy this week– I deep cleaned my whole house at 10:00p.m. last night and have just finished up alot of the little loose ends I’ve had and now I am so excited to have our little girl– I feel finally prepared!

cuz all car seats think like that right.
Anyways one of the projects that I finally finished was Ellie’s dress– I started this over easter– ya it’s taken me that long.– but in my defense I did sew two pettiskirts in that time frame also.
Anyways I love how it turned out and had to show it to you.

The cute little bloomers with ruffles

And a cute little flower headband with pearls–
I love pearls, they just seem so classic and yet vintage at the same time.
Here’s option number 2 for the dress though– a little bit more of a modern flair

Which one do you like the best?
The Vintage or Modern?
posted by alif, Categories: Uncategorized
How to make a Pettiskirt
28
April
2010 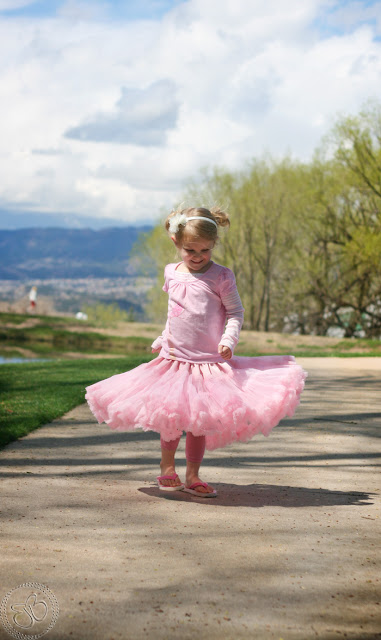 First things First– Do you really want to do this?  I mean really?

I was one of those people that thought oh it can’t be that bad– but ya it can—
If you don’t have the time– seriously don’t do this— you’ll pull all your hair out– there really is a reason that they are so expensive– These suckers are so time consuming!
But if your anything like me you probably won’t listen to me

and maybe it’ll be easier for you

plus your just tempted by all that sweet fluffy goodness, admit it, you so want one, even for yourself. 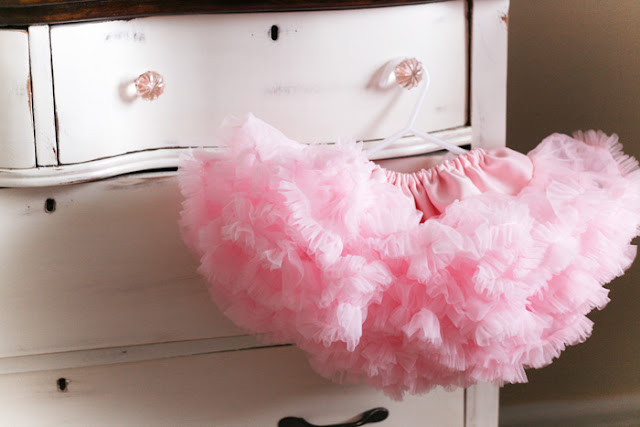 I                                          of course I have to give credit to the two sites that helped me a ton
sew mama sew forum
and this page
Even with them I am such a visual learner that I literally had to draw up what in the world they were explaining– Dave of course had quite the laugh at me session, as for half an hour I sat and talked to myself as I tried to figure it out and explain it out loud to myself and then draw diagram after diagram– but I got it, I figured it out- it’s all good now

What you’ll need:
*Nylon Chiffon - (do not use Poly Chiffon because if frays) I could not find any stores around me that carried it so I ordered mine from AFC- express (I do not really know how many yards you’ll need cuz’ it varies so much with the length you want, size, how fluffly ect. I ordered 10 yards for the two skirts I made and ya shipping sucks!)
*Some fabric for your waistband– satin charmuese is what most people use
*Definitely a rotary cutter and mat– unless you’re really insane
*Elastic, thread, a knowledge of how to do a gather stitch, and if your so lucky also a ruffler foot

So Step #1 is figure out the measurements 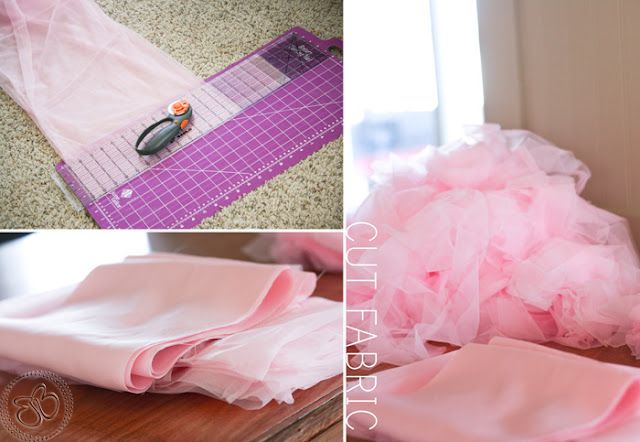 A- Sew the Ruffle Fluff and the Tiers end to end to end also if your waistband fabric frays sew a small hem on it to prevent it from fraying. 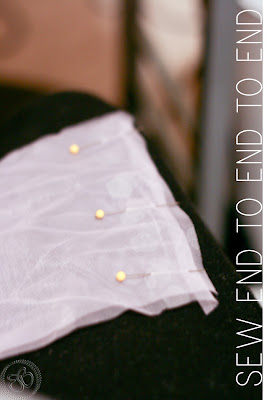 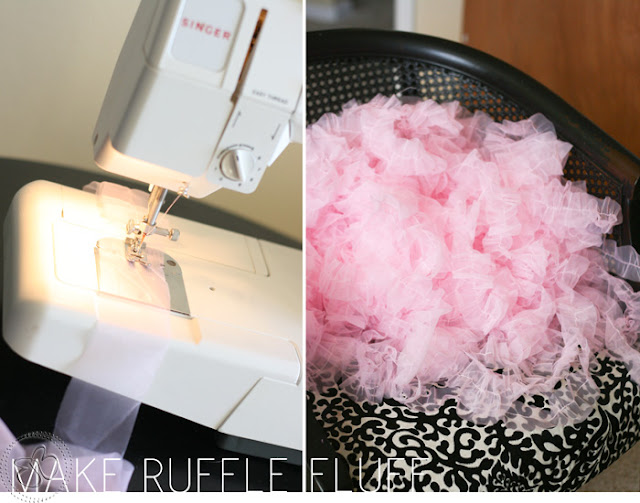 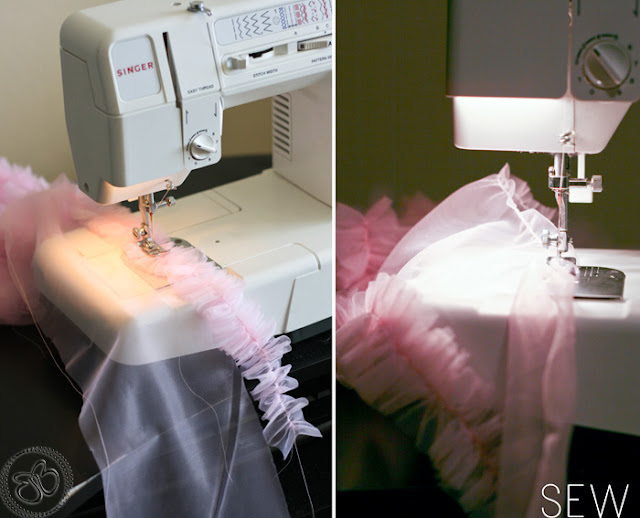 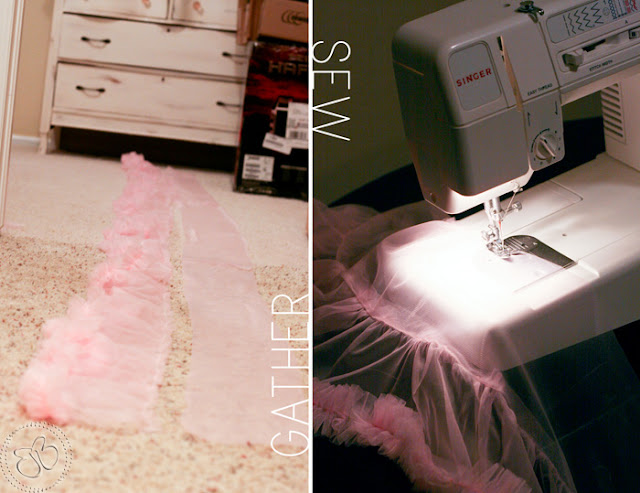 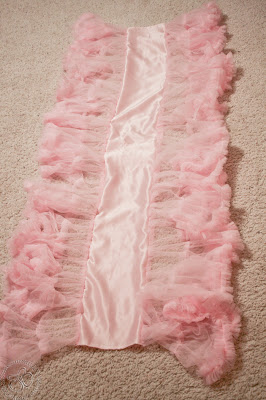 F- Sew the ends together so you have a tube 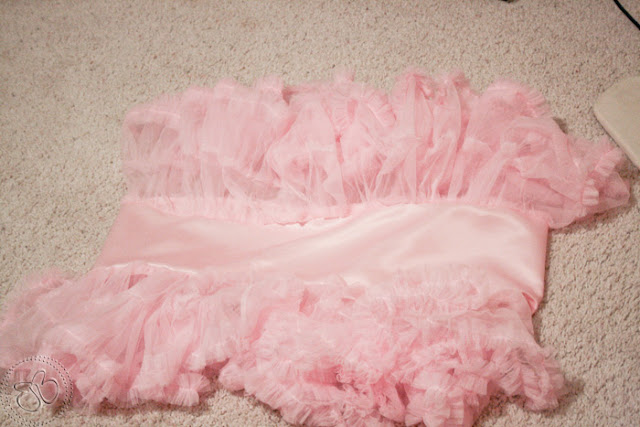 G- Fold in half and sew the encasing for your elastic (about 1″ wide), cut elastic to the waist measurement and insert elastic– (thank you whomever invented the safety pin- your a life saver) and close off. 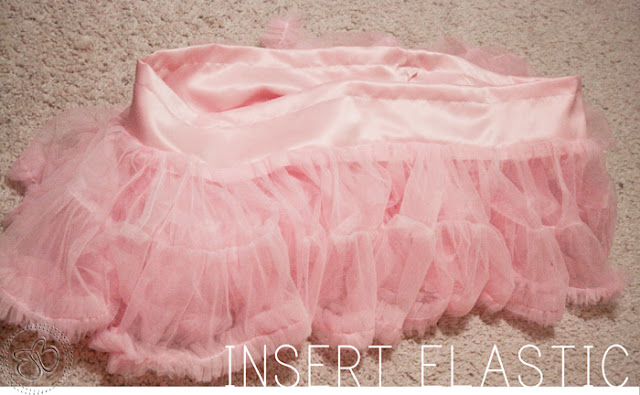 Wahoo! you are now done– make sure and wake your girl up at 2 a.m so she can try it on– and than just sit back and enjoy watching her love and love and love her new princess skirt! 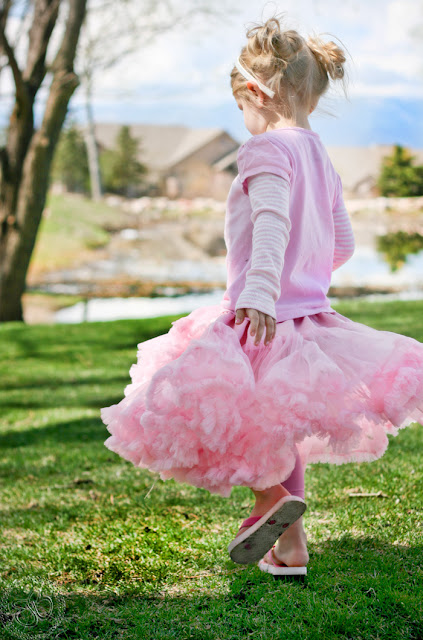 First off, I’m sorry dear blog that I’ve been naughty and neglected you– I have a lot of good excuses though.. oh you don’t want to hear those– fine than I won’t tell you– I’ll just be better,ok— Ohhkaaaay?

but really, I’ve been avoiding you a little cuz’ well, I’m a little bashful– you see I made a table and wrote a post just being my silly self, than decided I’d tell Ana at knock off wood thank you for the plans and show her a pic– and than I linked to just a fun party at Remodelaholic – but than crazy things started happening

I was featured here and on the bragging board– I was so flattered but also a little embarrassed and nervous, but everyone was so sweet and nice in their comments, no one had yet said that they hated me, and than new cute little pictures started popping up on my followers link- wow a lot of new pictures– “oh wow do you see all those pictures honey, What do you think they want me to say? I’m feeling a little queasy, I think I’m just going to go hide in our closet for awhile.”
But well I’ve missed you dear blog– I like to be silly and post stuff that we do, I usually get a much nicer reaction from comments than just a glance over the shoulder from the hubby saying “hmm ya that’s nice” so I’m just going to keep being myself and keep posting whatever pops in my head and hope that I don’t make all my little pictures/followers go away. cuz’ I like them and they all seem really nice and have left some really sweet comments that have made my day- (thank you so much) so anyways on to the post 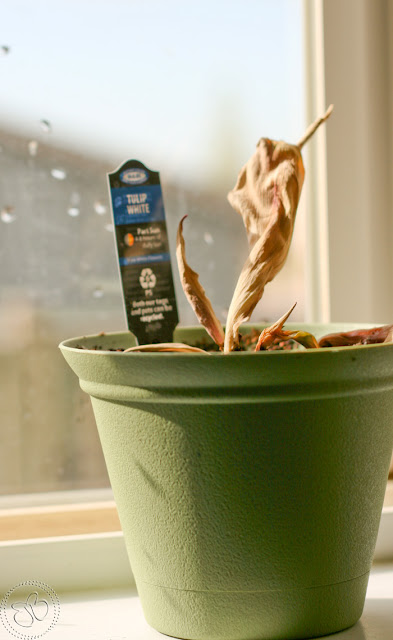 My sweet black thumb is as awesome as ever!
Every year I try, I really try, to plant and have things grow and live- but well something is obviously wrong cuz’ I keep killing them all— I just don’t know how and it doesn’t click and everyone says it’s fairly easy–
–water, sunlight, food, good dirt–
but ya– I need the “How to garden for people who kill every plant they touch” book 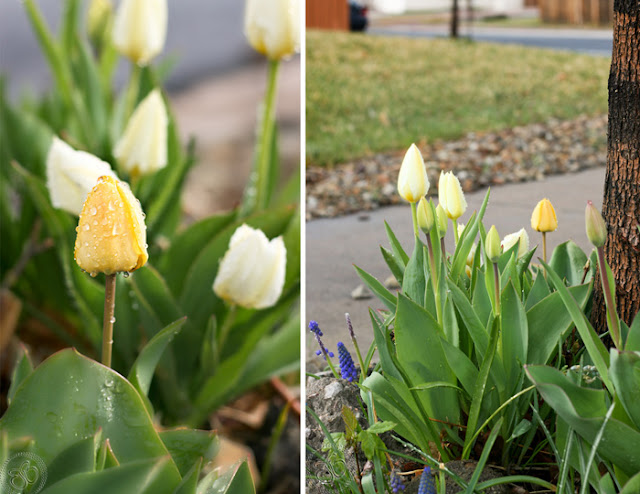 Thank you whomever planted the flowers– I so love looking at them and enjoying them.
I think Dave took pity on me though, (or it cold be the fact that it’s our anniversary soon, but we’ll go with the pity story in hopes of more flowers this weekend :)) – cuz he brought me home this lovely bouquet of flowers, and well when those die I don’t feel so bad cuz’, It can’t really be my fault that they die- at least that’s what I keep telling myself. 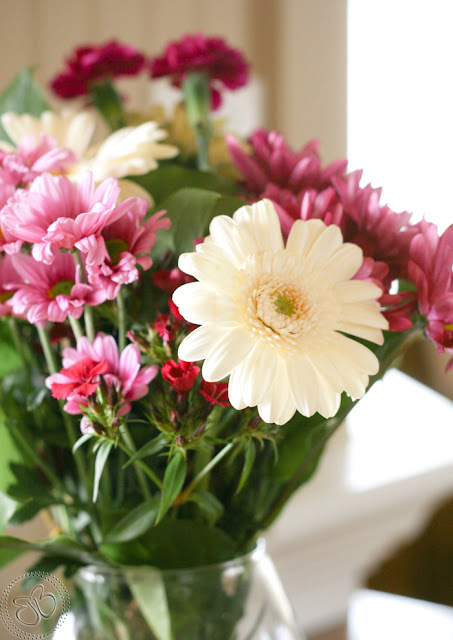 
So over Easter weekend, we finally built some storage shelves for the basement, which I’m excited to start filling up more– it will most likely be a slow process. 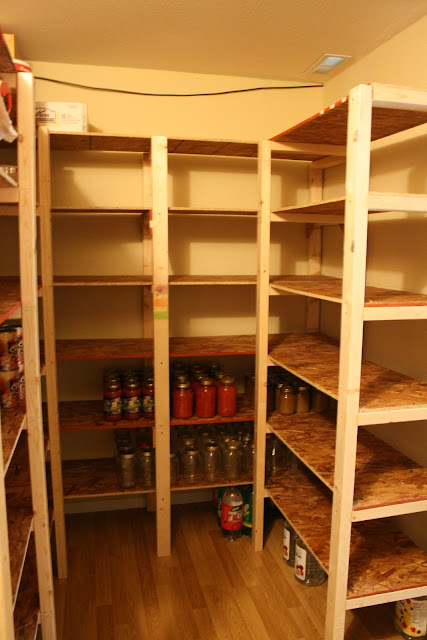 I’ve also started getting more prepared for the baby– diapers, wipes, blankets, going through Bryn’s old clothes and getting everything clean and organized and hung up– 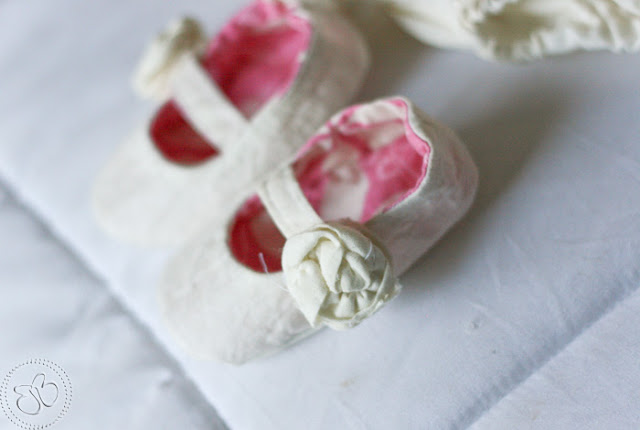 The sewing bug has hit strong too,so my sewing machine has gotten lots of love as I’ve sewed booties and bloomers and a dress and two of these suckers…… 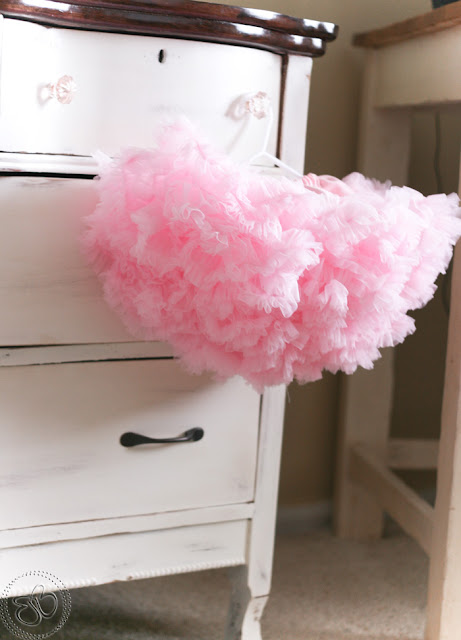 Pettiskirts-
ugh it was a lot of work, but I made a short tutorial for any of those crazy people like me that want to do this– I’ll post that next :)
Also I had tons of fun designing my nieces wedding announcements– so glad they asked me—
***FAMILY STOP READING SO I DON’T SPOIL IT FOR YOU*****
Here’s the one they choose,

First off– I finished Brynley’s Dress— yay! and this year not the day before easter (oh ya- oh ya)– course thinking ahead to next year and the fact that I’ll have to make two easter dresses– hmmm I’m not sure how well I thought out this tradition– I never thought of the fact that I could have more than one girl.

I used my friends pattern last year and was going to just try to do it this year without one– but seeing as this is only the third dress I’ve ever sewn, and I really didn’t want to push my “forgetful pregnancy mind” I figured I’d just go buy the same pattern– I was so smart though I forgot that the pattern doesn’t have all sizes 0-4 in it and they split it up so I bought the 0-2 pattern and didn’t realize it till it was all cut out— so I still had to use my preggo brain and resize it.

The other thing that happened this week is Dave got his Computer–
Ya his dream computer, the one he’s been harassing me about for over a year now, the one he’d build and love and name something cool, and actually get out of bed early in the mornings so he could play on it before work, Yep he got that one.
Really I’m happy he got it– I like to make him happy and it makes me happy cuz’ now my camera is bumped up to number one on the to get next list.

So clean and pretty- no wires hanging everywhere– no big computers– ya I’ll never get that-
cuz just 1out of the many packages that came yesterday- that held “only the Case” to Dave’s computer was as big as Brynley– I kid you not.
Luckily it was a little smaller than the box– but not by much

Ahh oh- well I still love my nerd– if he only wasn’t so dang sexy and sweet and thoughtful and cute with the kids and my best friend- I’d kick him and his huge black box outta my study!
Anyone got any suggestions on how to make this